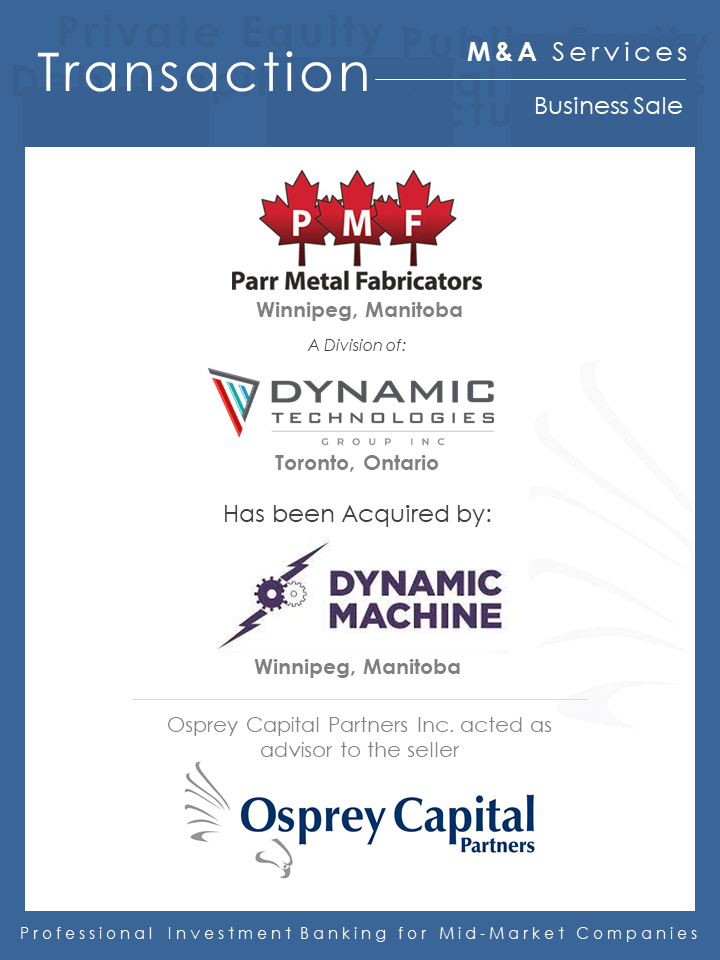 September 2021 – Osprey Capital Partners Inc. is pleased to announce it has assisted Dynamic Technologies Group, a publicly traded company on the TSX Venture Exchange (DTG/TSXV), in selling its Parr Metal Fabricators subsidiary to Dynamic Machine Corp., both of Winnipeg.

Osprey Capital, an investment banking and financial advisory with offices in Toronto, Winnipeg and Halifax, worked alongside Hawkbridge Capital Partners, an independent merchant bank platform in Toronto, in securing the deal.

Dynamic Technologies, a designer of media-based attractions and ride systems for the global theme park industry and other entertainment destinations, has operations in Canada, the U.S. and China, but sells its products around the world.

Its Parr subsidiary, which was founded in 1975, is a custom-metal fabricator serving the pulp and paper, mining and food industries.

It also provides a variety of fabrication to the construction and truck trailer repair sectors.

After Dynamic Technologies decided to focus solely on its core business, it engaged Osprey Capital and Hawkbridge to sell Parr through a highly competitive process to a specific group of strategic and financial buyers. The intent was to maximize the return for Parr.

Osprey Capital delivered the pool of potential suitors and the auction generated the highest possible sale price for Parr.

Dynamic Machine was ultimately selected as the ideal suitor largely due to its stellar reputation as a metal fabricator. Parr is an accretive acquisition for Dynamic Machine and its 40-year legacy of exemplary customer service will continue under its new corporate umbrella.

“It was a pleasure to work with Allan and the Dynamic Technologies team. We are very pleased our advisory services were able to deliver the ultimate return for Parr,” says John Mottola, managing partner at Osprey Capital.

Allan Francis, vice-president of corporate affairs and administration at Dynamic Technologies, says the process conducted by Osprey Capital was professional from start to finish. “We wanted to find the ideal buyer for Parr in the most efficient way possible and Osprey Capital enabled us to do just that,” he says.

Richard van den Broek, president, and general manager of Dynamic Machine says his company is “ecstatic” to add Parr to its group. “The process was smooth with very few surprises. We believe the future looks bright,” he says.

Integral to completion of the transaction, Hawkbridge Capital Partners Inc. acted as co-advisor and MLT Aikins acted as legal advisors to Dynamic Technologies.

Founded in 1998, Osprey Capital has established itself as one of Canada’s leading independent mid-market investment banking and financial advisory firms. Osprey offers a range of advisory services focused on the execution of merger, acquisition, business sale, and finance transactions. Osprey Capital’s success in servicing clients’ M&A and financing requirements is a result of its understanding of the unique needs of mid-market companies and their shareholders and its strong relationships with industry players including strategic acquirers, Canadian & international private equity funds, institutional investors, lenders and banks.